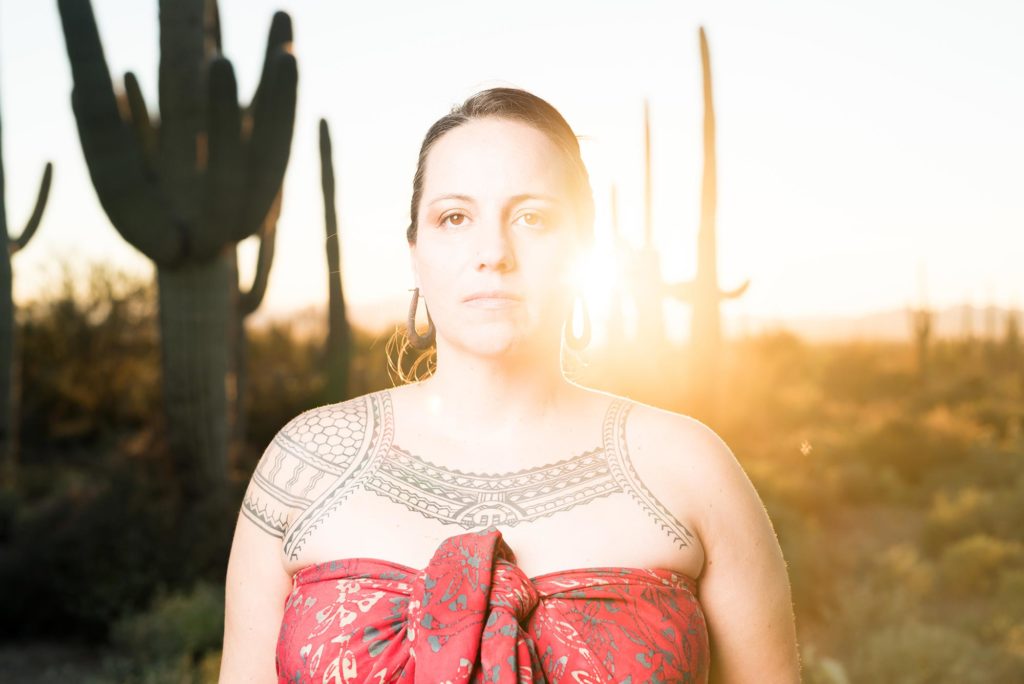 Tracy Howe (she/they/womxn) is a cultural worker, descended from people in Southeast Asia and Europe, and born on the Native lands of the Cheyenne and Arapahoe people in what is now known as Boulder, CO.  Tracy founded Restoration Village Arts, a learning and action network of artists and theologians building a just and beautiful world and working in today’s specific and intersecting movements of liberation including borderlands justice, earth justice, queer justice and racial justice.

Tracy is a songwriter, producer, director, emerging filmmaker, activist and minister and toured full time from 2000-2009 playing music at colleges, small music venues and festivals, churches, house concerts and prisons throughout the U.S. and Latin America. Her songs have been used by faith communities and in movement work globally. After finishing an M.Div. at Harvard in 2012, they began producing for other artists and organizations, releasing Songs For 1,000 Days for Bread For the World and the Oscar Romero Cantata for Luis Alfredo Diaz. Tracy has served as the director of art and liturgy for many ecumenical and global events, working with the Latin American Theological Fellowship, Micah Global, Sojourners, Ecumenical Advocacy Days, Bread For the World and the United Church of Christ.

In 2013 Tracy moved to Charlottesville, VA and settled into life with their then, 3-year-old daughter and the world changed in the wake of the murder of Trayvon Martin.  After Michael Brown’s murder, Tracy traveled to Ferguson with a delegation of faith leaders invited to witness and learn from the movement being born.  What unfolded in the following years brought Tracy deeper into community organizing, direct action and public witness work both in Charlottesville and around the country from Standing Rock to the US/Mexico Border to DC.  It also saturated her songwriting and artistry with a definitive call to action, liberation and humanity.

By the time Tracy left Charlottesville in 2019, they had been through a historic journey with her community, becoming an integral part of the organizing of faith leaders against white supremacy and fascism that descended on Charlottesville in unprecedented ways the summer of 2017.  As part of Tracy’s organizing they worked with Muslim and Jewish womxn in the city, collecting material as well as writing music and liturgy for direct action and public witness.  Tracy wrote a number of original songs and the liturgy for the interfaith service the night before the now infamous Unite-the-Right rally on August 12th.  The service gathered hundreds from Charlottesville and faith leaders from around the country who had responded to the call to come and stand against the violence and hate of white supremacy, including Rev. Dr. Cornell West and Rev. Traci Blackmon who preached at the historic service.

In the wake of the violence in #Charlottesville, Tracy released the album, Bring Me Some Peace, music laced with pain and hope for wholeness and healing, live at a concert in downtown Charlottesville just two weeks after the violence had descended upon their city in August of 2017.  Tracy also called upon trusted leaders, artists and colleagues to organize a community service on the one-year anniversary, and then released the full-length album, Things That Grow in 2019, full of songs born directly out of this movement work and liberating community.

In the summer of 2019, Tracy returned West, to Tohono O’odham land where their maternal grandparents were buried and where her mother died shortly after her arrival, in what is now called Tucson, AZ.  Tracy continues with the United Church of Christ in the work of cultural and community organizing and liturgical documentation, tasked over 2020 and the first part of 2021 to bring together a team of artists and ministers to create prayers, rituals, music and art around a chosen Psalm and theological groundings it offered, as well as the extraordinary issues immersing communities of faith in this time, environmental catastrophe, uprising against State violence, and the COVID 19 pandemic.

Tracy continues to write and produce music.  They released their single, Build the World in 2020 and the Rise Up 2020 EP under “The Restoration Project” the same year during the pandemic.  Tracy loves living and walking in the desert climate and laughing at her dog Oso.  She advocates and educates towards expanding consciousness around oppression and identity from white supremacy to compulsory sexuality, as a multiracial person with white skin, and an aro-ace queer.  Tracy is currently pursuing a Ph.D. in Applied Intercultural Arts Research at the University of Arizona and is raising a beautiful middle school aged child.

Music video for Frack Me, from Things That Grow:

Follow Tracy’s work and music on her social media @TracyHoweMusic.