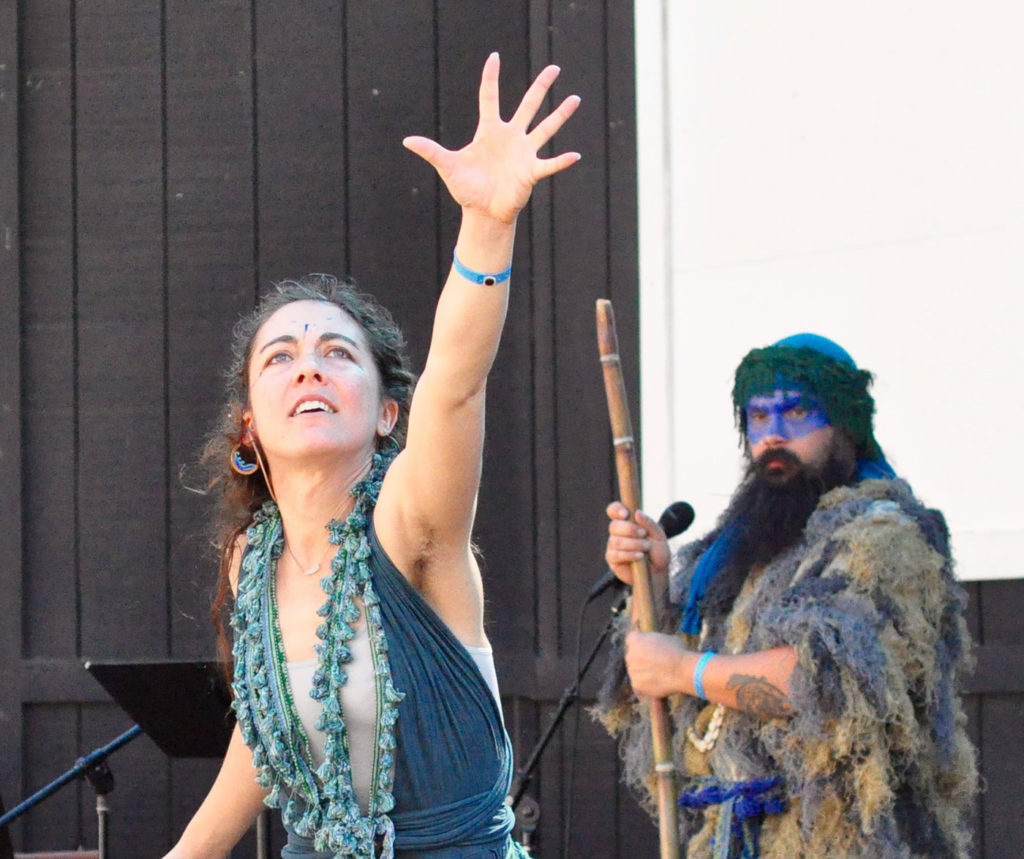 Holy Fool Arts is a theatrical production company that fuses earth-centered spirituality with the biblical prophetic tradition. HFA has performed and taught in churches, universities, seminaries and conferences across the country – offering theater that educates and worship that mobilizes. Founded by Tevyn East and Jay Beck and often accompanied by an array of collaborators; they demonstrate the power of applied storytelling by combining a myriad of art forms. Weaving the visceral, image-laden arts of dance and theater with the hypnotic power of rhythm heavy songs and chants, HFA works to diagnose(expose?) the root of our social ills and build imagination for the practices of resistance and restoration.
Jay Beck’s musical training is rooted in the rhythm and spiritual traditions of the West African diaspora. With a focus on healing and reconciliation, he works to help the church honor and celebrate drumming cultures. He has recorded for dozens of musical projects and performed with numerous groups including Madison Greene and Psalters, which shook and galvanized the radical Christian underground for more than a decade. Many remember his musical accompaniment for the nation-wide tour, “Jesus for President”, with Shane Claiborne. Many others have danced in wild abandon within his decade of fronting the Philly based Brazilian funk band, Phillybloco. His current music project is BEAST, a voice of and for the wilderness that combines poetry and ancient rhythms with a heavy dose of the blues.
Tevyn East, as a double PK, grew up steeped in the social gospel and in the world of contemporary dance. After gaining a degree in Dance from Hollins University, she spent a decade developing her skills as a performer, teacher, director, collaborator and cultural producer of immersive theater with the Zen Monkey Project out of Charlottesville, VA. Her artistic life and faith journey found its integration when she produced Leaps & Bounds, a one woman show that acts as an indictment of global capitalism through the lens of faith. Written in collaboration with Ched Myers, this show toured the country, reaching more than 150 communities between 2010 and 2014 and was turned into a film in 2012. Tevyn persisted in honing her gifts and advocating for embodied faith as a worship leader at Circle of Hope in Philadelphia, PA and continues to visit churches around the country as a guest worship leader.
Tevyn and Jay’s collaboration as artists quickly grew into a deeper partnership, and they were married in the summer of 2014. Together they produced and directed the Carnival de Resistance – a traveling arts carnival, education initiative, and eco-village demonstration project – that has produced 7 residencies in different parts of the US. This project grew to great acclaim, gaining coverage in progressive faith publications like Sojourners magazine and Geez magazine. Even more importantly, this project ignited the imagination of thousands of audience members, built solidarity with dozens of community organizations, and had life-changing impact on the hundred carnival crew members who generously gave their sweat and deepest hopes to its manifestation. It is indisputable that the Carnival de Resistance could not have accomplished such feats without the generous support of Restoration Village Arts.
After a decade of nomadic artistic ventures, Holy Fool Arts has relocated to North Carolina to begin building a land-based community project and cultural hub called “Dreaming Stone”. In Tevyn’s ancestral home of Rutherfordton, we are seeking to be schooled and reshaped by the land, to embody earth-centered faith and practice, and to weave land observation and restoration into our art and ceremony! You are invited to learn more at www.holyfoolarts.org and to follow us at www.facebook.com/HolyFoolArts.