“Poetry is a political act because it involves telling the truth…If you’re in the difficult process of living as a poet, you’re constantly trying to make an attunement to yourself which no outside manipulation or propaganda can disturb. That makes you a sturdy, dependable voice—which others want to hear and respond to. So, poetry…produces a dialogue among people that guards all of us against manipulation by our so-called leaders.”
— June Jordan 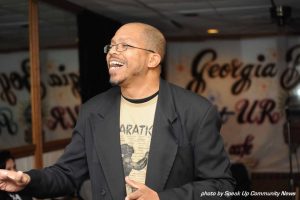 My interest in—no, that’s too weak a phrasing.  My need to be involved justice issues, in anti-oppression activity, can be traced to those who were key influences in my life.  That’s only fitting, is it not?  So much of who we are is shaped by those that impacted us, both in family and extended family.   I was mentored by a pastor, Rev. Wendell Phillips, who—along with a congregation full of conscious leadership—demonstrated a commitment to civil rights and a concern for the “least of these” [Matt. 25:40] that impressed upon me at a young age that one’s faith journey was more than merely singing and sittin’ and prayin’.  The legacy of my own family allowed me to connect parents and aunts and uncles to locations around my home area of Maryland and DC wherein they had fought civil rights battles.  Even the lessons my grandmother taught her elementary students—and my cousins and me—were full of black pride.  Thus, the very elders that surrounded me provided a natural connection to the Movement.

The above, however, did not prevent a wayward stint, during high school years, in right-wing thought—religiously and sociopolitically.  Thankfully, this period was short lived and my inner need for progressive action was reignited, fueled and forged by the crucial matters of the 80s.  I and many other college students and young adults in general developed our consciousness and delved into activism through participation in the Anti-Apartheid Movement, reacting against the domestic manipulations and international imperialism of the Reagan administration, and the like. Almost the entirety of my career has involved some manner of justice action, teaching or organizing.  This has manifested itself through—and been nurtured by—working in Lesotho, Southern Africa, during the Anti-Apartheid days, being a high school educator, doing anti-oppression ministry nationally and internationally, organizing against anti-immigrant hate, etc.   But where, you might ask, are the arts in all of this?

“The arts are critical in any justice movement, and certainly have been present in all of those I’ve been involved in.”

The music that rallied people, the literature and visual art that depicted what’s going on, the drama that interpreted and made matters real to people—all of these helped increase my understanding of what I was doing, and I have utilized these forms of expression in my own pedagogy.  However, it is only recently that I myself have been an artist using my poetic skills to spur folk to understanding and action.  The idea of even doing poetry started in the 2000s where once, when giving a keynote address to youth about the intersection of faith and justice, I actually decided to freestyle a bit of spoken word to start the session—something that was way out of my experience!  I loved it, and so did the listeners!  Not long after that I had the privilege of MC-ing a concert in Chicago’s House of Blues, a rally for the Coalition of Immokalee Workers (http://www.ciw-online.org/).   This group of tomato farmworkers in south Florida have been organizing since the late 90s for improved wages and working conditions, challenging many in the exploitative farm labor industry and fostering agreements with a variety of food companies.  In making sure the flow of the concert was tight I almost freestyled a piece dealing with farm labor, in order to avoid too much dead space between acts.  It turns out I didn’t need to, but I looked back on it almost in shock!  Did I really almost go off the dome in front of thousands of people in the House of Blues?   This poetry seed was growing!  By the time I moved to Connecticut in late 2008, doing some civil rights organizing, I was primed for it more than I even knew.  The CT poets encouraged me, supported me, pushed me to get on the mic and to start writing pieces.  And I was hooked!

I’ve been on the spoken words scene for less than four years, but once I started doing poetry, it quickly became a need to be fed just as much as the doing of justice.  So the two were made for each other!  Many, if not most, of my performance pieces are justice-oriented works that, I hope, elucidate various matters that we as people striving to be conscious and to make this “on earth as it is in heaven” must be attentive to.   As the June Jordan quote implies, poets—and, I would say, artists generally—have a responsibility to speak truth to power, free of the conformity that continues oppression.  Poetry has become a key part of my activism and ministry, and is a natural continuance of the transformative efforts of human rights leaders and conscious artists before me.  May my work honor them as well as catalyze new energy for the Struggle!

By the way: the thoughts that almost got spat in the House of Blues that day?  They did eventually become a piece, performed first for a CIW rally in Florida, and often since.   Water those seeds of consciousness in you with the love and skill and energy you manifest through your art.  The world needs you to do such, and you’ll find yourself enriched by doing so! 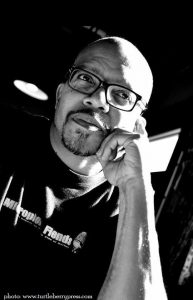 Since the time of this writing, Analysis has continued to write and perform poetry across a variety of justice/human rights issues as well as subjects of family, love, and desire.  He is also a bookseller at an independent, radical bookstore/restaurant cooperative called Red Emma’s Bookstore Coffeehouse, in Baltimore, MD.  His poetry chap book, Somewhere Through the Haze, can be purchased there (https://redemmas.org/titles/24652-somewhere-through-the-haze).  Analysis can be reached at www.facebook.com/analysisthepoet or on Twitter @analysisthepoet.