As people are rising up in resistance to government corruption and totalitarianism across Honduras, the band Cienaños is writing music for the fight– music to lift the spirits and engender hope in the hearts of Honduran people. But Cienaños is much more than a musical group– it is a movement, a social platform, and a dream of a few artists who came together to make space for art to heal and inspire. Restoration Village Arts had the great privilege of supporting La Banda de Cienaños to be present at the Carnival de Resistance residency in Minneapolis this past September. Cienaños members were integrated in the Carnival crew’s house band, which performed during shows and at local events, and Cienaños hosted a solo performance at Bethany Lutheran Church. The spirit of Cienaños’ resistance work in Honduras inundated the work of the entire Carnival Crew as Cienaños taught about the sociopolitical situations in their home country. RVA’s Program Director Grace Aheron sat down with two founding members of the band– the brothers Gustavo and Leonardo Moreno– to hear more about how art and activism work together in the Cienaños project. The full interview (in Spanish) is included below.

“We don’t just see ourselves as musicians— we are storytellers.”

Arte con Conciencia
“The Cienaños House,” explained Leonardo, “Is a multicultural platform where artists can create through a process with social and cultural awareness.” Arte con conciencia (art with awareness) is a phrase often used by Cienaños to describe the type of work they do and support. La Casa de Cienaños houses music, an art gallery, a performance venue, and community building events all centered around providing a space for arts and culture in Honduras to be supported and flourish. “Hondurans do not have access to real information about the things that are happening in Honduras… so we created this platform with the intention of creating and funding art with awareness and free expression. The owners of the means of communication [in Honduras] are politicians,” said Leonardo, explaining that media control and censorship severely limits what is and is not allowed to be expressed publicly.  “We want artists to be able to be critical of the things that are actually happening in Honduras.” 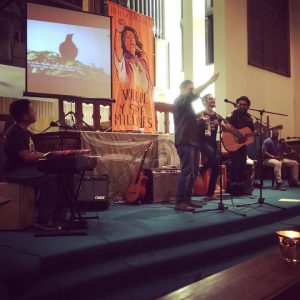 For example, La Casa de Cienaños is directly addressing disparities they see in access to exposure for women artists. Gustavo explains, “In the majority of cultures in the Americas, we live in a machismo/patriarchal system, where women are invisible. So, another fight that we have and another commitment we have in the Casa de Cienaños is to empower women. We have nights to empower women and show their art, but more than just empowering women, we want to empower emerging women artists. There are a lot of organizations and platforms of art where you can present your work, but they always ask for a curriculum or a list of experiences, but there are people who are just starting out… so we are empowering women and women who are just emerging as artists.”

On the right, Cienaños performs at Bethany Lutheran Church in Minneapolis, backed by a banner featuring the image of Bérta Cáseres, an indigenous Honduran activist who was assassinated by the government for her advocacy around environmental justice.

A National Hymn
But this commitment to free speech and cultural criticism has landed Cienaños in a serious battle with the government. Leonardo explains the ordeal: “In August of 2015 they [government officials] closed the doors of our house with military force and they used their authority to shut down us down. They wouldn’t let us generate art or color or life or a space of hope for the Honduran people. Without giving us an explanation, all these military people showed up and closed our conversations. They took our car, our identifications, and they threatened us with death if we continued with this. There was a legal process for a long time… but finally after a long fight in the court system and with public ministers, we achieved justice and were able to return to the house.”

The band decided to memorialize this ordeal in their music video, “La Rolita.” Video footage of muralists painting over their artwork inside the house rolls across the screen, the artists describing their sadness and anger at the government censorship. “In this video, we show painters because the painters had murals in our house— murals of awareness— and the government asked to see them inside our house. They came inside our house and closed it, so we made this video where the artists talk about how it felt for them– they said it was the first time that they were told to erase their artwork. And they [the muralists] said that the house had a part of their soul,” explains Leonardo.

Artivismo
While La Casa de Cienaños had been on the government’s radar for their messages of free speech and their criticism of those in authority, the impetus for the house shutdown came after the group’s unintentional involvement in public protests in June of 2015. In that month, thousands of Honduran people took to the streets of Tegucigalpa in protests of a $200 million government scandal involving the Institute of Social Security. Unbeknownst to them, a song written by Cienaños became one of the marching songs. Gustavo speaks of this experience:  “This song means a lot, particularly because it has a national rhythm (Honduran rhythm) and the point is that no one can pay for you. You don’t have a price because no one can buy your ideals. No one can buy the wind or the sun. They [the protestors] felt power in this, so the song became a hymn for when the people were marching, they were yelling this in the capital, Tegucigalpa. When we made the song, it became easier for the government to want to close the house. If they closed Cienanos, it was like they were closing the art and culture of Honduras. And the video, “La Rolita,” talks about all of this.” When the government officials asked who created the song, they were lead to the doors of La Casa de Cienaños.

“Definitely, the biggest problems we’re dealing with in Honduras are about security- we’re the most insecure country in the world. And corruption, we live in a culture of corruption– the biggest cases of corruption in all of Latin America,” Leonardo said. “So, because of all of this, we link the movements of justice to art like activists and we have the theme ‘artivismo.’ Art is a way in which information can get to the people easily and directly… to be a light and hope for people. So that people know they are supported.”

Stay Connected with Cienaños
The band and house are spreading their message all across Honduras, Central and South America, and the world. They are completely self-funded and do not charge for concerts, committing to their ideals of sharing art and music with everyone. Stay connected with Cienaños through their Facebook page to support their resistance work in Honduras.

“We’re really happy to be here because this work gives us hope and support and joy that there are people outside of Honduras that want to know us and our stories, and to support us as well.”