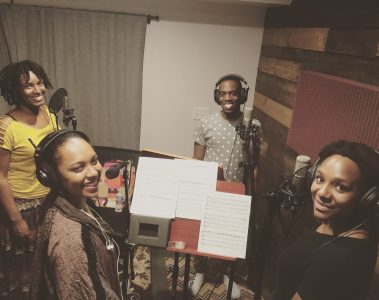 Bree Newsome arrived last night for a 10 day artist residency leading up to her presentation as part of Human/Ties and the session on Mourning and Memory, Legacies of Slavery and Freedom.  (The event will be livestreamed this Saturday, Sept 17, from 10-12:30pm.)

Bree is an activist and filmmaker from Charlotte, North Carolina. She earned her BFA in Film and Television from the Tisch School of the Arts at NYU and she has written and directed a number of short films, including Your Ballot, Your Voice, a humorous public announcement encouraging youth voter turnout and Wake, which won  a myriad of awards on the festival film circuit. She is best known for her act of civil disobedience on June 27, 2015, when she was arrested for removing the Confederate Flag from the grounds of the South Carolina state house. Her act and the publicity that followed put pressure on state officials, who removed the flag permanently on July 10, 2015.

We met Bree this past summer at the Summit For Change in DC where Tracy Howe Wispelwey was organizing an artist convening.  Bree planned on coming to receive an award for her activism and witness but knowing that she was an artist, Tracy asked if she would be interested in co-leading the convening and the seeds of friendship, community and collaboration were sown.

We at Restoration Village Arts believe that artists at the front lines of the struggle for liberation, and awakened to the spiritual reality that we are deeply interconnected and beloved by the Living God, create work that is both the fruit of, and catalyst for, ongoing transformation.  They embody the mystery of faith that life and beauty unfold in struggle and suffering because transformational love is real.  Resurrection can be witnessed. 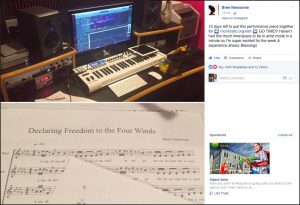 When asked to be a part of this event in Charlottesville, Bree was invited to tour Monticello and learn some of the stories of the enslaved men, women and children who lived there.  She took those stories and wove them into a chorus representing four angels singing to the four directions and proclaiming that these voices will not be silenced.  She is spending this week finalizing the production and music with Tracy in the RVA studio as well as collaborating with local dancers and artists with the Community Performance Project who are choreographing a dance to be presented at Monticello.  We are thrilled to be hosting her and look forward to sharing more beauty and hope from our work together!