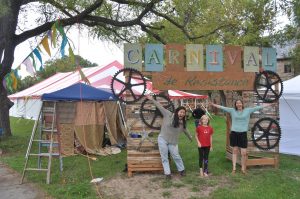 Often, art is treated as incidental to gatherings, conferences, institutions, movements. Artists are invited to participate for their additions of texture and creative flair— but what happens when art is centered in the struggle for collective liberation?

Last month, Restoration Village Arts’ Program Director Grace Aheron submerged herself in an experience that endeavors to do just that— to treat artistic creation and expression as the movement itself. The Carnival de Resistance, a creative project supported in part by Restoration Village Arts, gathers artists and activists from across the globe for an annual month-long residency. In its fourth iteration this year, the 30-person crew inhabited the back lot of Redeemer Lutheran Church in the Harrison neighborhood of North Minneapolis.

Working at the intersections of faith, activism, and creative expression, the Carnival drew in a wide range of folks who wanted to play along— children from the neighborhood, young activists organizing for the movement for black lives, elders from the church community, radical puppeteers and muralists. The weeks were peppered with community engagements at various colleges, gardens, and after school programs, and on the weekends the Carnival crew convened its ceremonial theater. The drumming rose up those nights like a heartbeat. 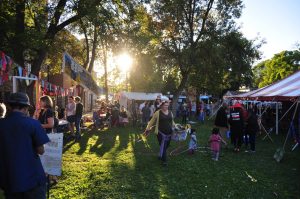 Carnival invites participants to step into a transformed way of seeing the world. In the Midway which precedes the shows, full grown adults romp around in faceprint and costumes, inviting folks to engage in anti-oppression games (like “Run the Moneychangers out of the Temple” and “Pin the Tail on the Scapegoat”). Adults and children alike are invited to play along— to pick a card out of a deck and participate in an activity that helps reconnect with their wild side (like howling like a wolf pack or lying on their bellies to experience the grass more closely), to engage in a magic show that helps folks believe in the impossibility of imagination, to walk through a village/art exhibition hybrid where beauty is made out of reclaimed and up-cycled treasures. 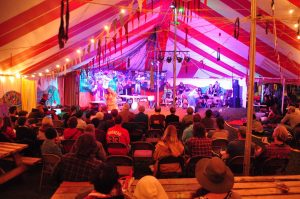 The shows feature the presences of familiar biblical characters— Miriam the sister of Moses, John the Baptist, Crow and Dove from Noah’s Arc, the Divine Feminine. Their prophetic voices and movements rise up in condemnation of present-day consumer culture, disconnect from the earth, the endless pursuit of commodification and progress. Carnival invites a new way of inhabiting justice issues. What does it look like to dance out your mourning over the poisoning of the waters? How can we sing about God’s feminine presence? What would the prophets of the ancient days have to say to us in 2016?

In John’s Gospel, it is written that the word became flesh and dwelt among us. The verb for “dwelt” (skenoo) literally means to pitch a tent— that is, God pitched her tent among us. If God were to pitch a tent amongst us these days, how wold she convey her messages? Perhaps not through didactic speeches or discursive sermonizing, but, we believe, in the delightfully wily and surprising ways God seems to work in the world— perhaps through movement, perhaps through song, perhaps through human bodies connecting to human bodies. Liturgical art is the external expression of internal truths. Like God, we take on flesh to bring new life into the world through creation. Carnival responds to those birth pains.

Restoration Village Arts is proud to partner with the Carnival de Resistance and its artists. We will be featuring the voices of carnival crew members (aka “Carnivalistas”) in subsequent blog posts.

All photos by Tim Nafziger.